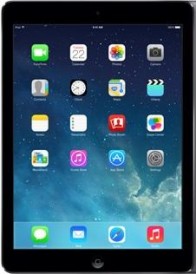 iPad Air is 5th generation product of the Apple’s iPad family product line. And what makes it unique is, its light weightiness. That’s the reason apple gave it the name iPad Air instead of iPad 5. The iPad 3 (known as iPad with retina display) and iPad 4 were accused of being bit thicker than previous generation iPad tablets. The extra thickness was the result of incorporating bigger batter to power up the retina display. But with iPad 5 apple solved this problem and the result is 7.5 mm thin and 478g tablet. To give some idea how lighter it is compare to old generation, let me tell you the iPad 4 was 652g heavy. This difference of 174g may not seem very much but when you hold any tablet for 3-4 hour then you will appreciate this technology advance in light weightiness.

The second new thing this tablet offer is the A7 chip with 64-bit architecture and M7 motion coprocessor. Despite of being just dual core processor it blows the competitors out of water. That is because of its 64 bit architecture. Apple is the first company to put 64 bit chip in mobile devices which clearly gives the company an edge. Since this processor is coupled with M7 motion co-processor so it doesn’t suck all the juice out of the battery.   As per apple “It measures motion from your iPad Air by pulling data from the accelerometer, gyroscope, and compass. So your apps can give you a better experience based on the movement of your iPad Air. It’s a task that would normally fall to the A7 chip. But M7 is more efficient at it, which saves on power.” I don’t know how much this is true but battery life in iPad air is clear indication that whatever technology Apple embedded inside iPad Air works and preserves the 10 Hour battery life.

Apart from this iPad Air hardly offer anything new compared to old generation iPads. Though other several minor upgrades are also there like double the Wi-Fi speed. But I hardly know anyone who previously complaint about the slow Wi-Fi speed in iPad. But still this Wi-Fi speed upgrade is welcomed.

In software front it features the iOs 7. Yes you are right the flat UI version of iOS. It feels perfect with iPad Air and maintains the feeling of light weightiness. The new version of iOS is coming this winter and this tablet is sure shot upgradeable to new version. This is the thing I love most about apple devices. You can always be sure that next software upgrade will surely land to your newly purchased just a generation old device. Thins thing is not always the case with android devices.

So Overall iPad Air is a premium device. It looks beautiful and feel amazing in hands. Apple clearly knows where to push the technological advancement. Maintaining the battery life and making the device smaller and handy are always the biggest challenge. And iPad air clearly overcomes those challenges.

Now coming to the Ugly part, iPad air doesn’t feature Touch ID sensor. So the ease of unlocking and uniform experience with iPhone 5S is missing here. Touch Id is one of the prominent feature of iPhone 5S. iPad was initially created with the concept of keeping the experience same on iPhone and iPad. So this time iPad air certainly lacks in this expectation. And not to mention it is still an expensive device. Now, when India is being flooded with cheap android tablets. iPad still a luxury tablet. In the cost of iPad you can easily buy a decent laptop. Which can be a lot more productive than iPad.

iPad air is premium but expensive product. So if you are seriously an apple products lover and you want to stand out in android crowd and more importantly you can afford. Then look no further and rush to the Apple iStore.

If you are looking for a budget tablet then it’s defiantly NOT for you. Plenty cheap android devices are available which are capable enough to satisfy your need of a tablet. Nexus 7 2013 is your best.