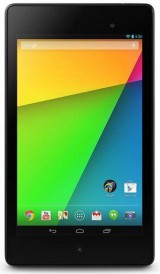 Google repeated the magic of Nexus 7 again with the launch of second version of the same device. In year 2012 Google launched the nexus 7 tablet manufactured by ASUS which was a huge hit because of its affordable price and easy to carry size. Then they released the next generation tablet Nexus 7, 2013 with higher specs.

If you consider the specification then its huge improvement over the last year’s device. Especially display now qualifies the retina display category (A sexy name given by apple to the screen displays which have more than 300 ppi). So theoretically your eyes won’t be able to notice the pixilation. Other big improvements are in CPU and RAM. Now Snapdragon S4 pro quad core CPU with one extra 1 GB of RAM makes the ‘jelly bean’s project butter’ really buttery smooth. Since it is a Nexus device, so all the android update lands to this device as soon as they are released. More to this, device is now lighter, narrower and thinner. So it fits easily in your hand and pocket. New nexus 7 also support 4G LTE dual band and wireless charging.

This second generation Nexus 7 is little costlier than that last generation. But it’s totally worth the money if you look at the huge improvement such as display and Ram.
In the software area Google released the device with version of android Jelly Bean 4.3 but now android 4.4 Kitkat update is also available. This version has restricted profile as a major new feature along with few minor tweaks.

If you are looking for budget tablet than look  no further that NEXUS 7 2013. There is no match to this tablet in this category. But if you want a very premium looking product then you might consider purchasing iPad or iPad mini.