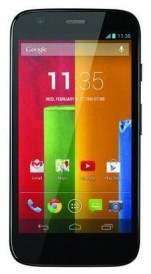 This moto G is one of the low budget mobile with superior features compared with the rivalries in its league.  To start with- no need to go through the details again and again, if you want a fast responding phone and don’t want to pay much then Moto G is a blind buy.

Into the hardware, phone won’t bother the user like the Samsung with its plastic body. Even though the average buyer won’t give much into its aesthetics, the Moto G has a premium look and solid feel.  It’s pretty basic phone even though you can feel a quality product. Compared with the Galaxy S4 or any other Samsung phone, you will feel the weight in your hand and substance to it. The Moto G has the elements of the design from the Apple 3GS. The 4.3 inch display makes the user hold on to the mobile firmly.

The android 4.3 comes along with this and Google has guaranteed the update to 4.4 and beyond and lets see how far it will go. One of the notable feature is the screen. The screen is bright, crisp and very delightfully done. The screen is 720x1280-pixel IPS LCD, which works out to a density of 326 pixels per inch and is sharper than the iphone 5S which is 326ppi .There is a pinkish , purplish noise to the screen, in the Moto G, besides that the display is awesome.  The volume button and the power button are pretty responsive and kept at the right place and  you won’t have any trouble with those.

The mobile is very fast and  there is not lag in the loading any of the app and this is one of the brightest feature. This cheap phone with the low speed processor seriously challenge the high end phone pretty bodly with its performance. Might be this phone doesn’t have a quad core and 2GHZ processor, but the specs won’t mean Jack every time , for me this phone is pretty fast .  Even if it’s a cheap phone the mobile gets on real too quickly, quite as fast as the high budget phone with out any delay or lag.

This phone also give almost a day battery life might be a little more.  Wireless, cellular and voice, reception, GPS, etc  are all no out of ordinary. The mobile has the water repellant screen and might be you can wipe off few droplets without a shirt circuit but never take the smartphone for a bath.

Camera is really low and laggy, quality is bit poor.  Might be cost cutting concentrated bit on the camera. For average use this is enough. Another con is the fact that you cannot expand the memory. If you want soo many HD games and storage then you might need to go for another phone. The lack of the 4G might concern some since the 4G has stepped on to the street of metros.

Think about what you are paying for the phone which can offer better that many of the rivalries which cost more. Then it will sweep you off the feet .It nearly wiped off the cost- spec relation and hope this will make a difference in the future.

If you are lookling for a mobile with good spec and low price and also have some brand value then look no further than MOTO G. Its great value for money. it won't make you stand out of crowd but satisfy all your smartphone need.

But if you are brand and look concious then its not certainly not for you. Xperiam M Dual is good substitute but of course with bit inferior hardware.

And if you are bit sporty then You can also bet on new entrant in the market Xiaomi Mi 3. It may cost you little extra money but  comes with high end hardware and no cutomer support.