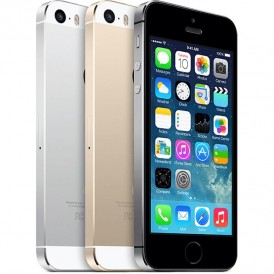 iPhone is the device of class. I am also one of the believer of the famous saying “There are smart phones and these is iPhone”. Hold the iPhone in your hand and you will realize how much premium this product is. The quality screams everywhere whether is the chamfered edges obtained by diamond cutting or the metallic band around the device or the precisely fit buttons.

Device gives the feeling of solid sturdy but beautiful piece of brick type of thing. Because you don’t see to many joints and when the device slips from your hands, you don’t see your cell phone dismantling into battery and back cover and rest of the body. Device is also perfectly balanced. The weight is uniformly distributed throughout the body.

All the buttons on the metallic band are solid metallic button and gives you confidence that they will not wear out in few days of use. The most used button, yes you guessed it right, the circular home button, it is made of plastic but it is also equally durable.  When I bought my first iPhones which was iPhone 4S, I used to be worried that plastic home button may render useless anytime because of its excessive use. But despite of my worries home button is still working with same feedback and stiffness as it used to work when my iPhone 4s was new. And iPhones 5S home button gives the same level of confidence. Though home button this time in not concave as it used to be in previous version. But the side ring of Touch ID around home button gives the same feeling. Also it’s covered with sapphire glass. Since sapphire glass can’t be scratched so ‘Touch Id’ works flawlessly without being damaged by scratches after few months of use.

Not just the exterior but what’s inside the iPhone 5S, is also equally impressing. It has new version of apple’s home developed silicon, A7 processor which is a 64 bit processor. And it is the first 64 bit mobile processor. It may not have too many cores packed inside but it performs better than any existing mobile processor despite of being only dual core. The main reason behind this is considered the highly optimised software.

Talking about the software, the iPhone comes with iOS 7 which gives completely different feeling compared to older iOS version because of its flatter look. Most of the icons are made flat but still look familiar nothing completely crazy alien UI sort of thing here.

Most awaited android like notification drawer also made its debut in iOS 7 along with the bottom drawer for quick settings. If you ignore the argument that it’s copied from android, its pleasure to use and makes life bit simpler. Some core apps are also update, like camera app which has a HDR mode now and photos app which can displays photos month wise and year wise.

Another big improvements comes with touch ID. You can now unlock your iPhone using your fingerprint. Swiping over home button at any orientation works. It is better than the similar feature of Samsung Galaxy S5 which works only when you swipe perpendicular to the home button.

Now comes to the our favourite part of telling the ugly part. So biggest drawback with iPhone I think is the relative smaller screen compared to other flagship devices. While all other mobile screen size finally converging to the 5 inch, the iPhone 5S still comes with 4 inch screen. Though there is no denying the fact the iPhone 5S form factor is best for one hand use but this also implies that there is lesser real state for app to show their personality. When the iPhone was first launched they removed most of the button and kept the screen centre focus point. So that user can have immersive experience. But now Apple is the only company seems lagging behind in terms of screen size and immersive screen experience.

iOS 7 gives the new look to iPhone but colour looks washed out also sometimes it seems kind of  incomplete. Before I received 7.1 update, old iOS 6 type keyboard used to pop up many places instead of translucent iOS 7 style keyboard.

One more area I would like to focus on is the cost. And I believe you may all agree to me that like all other apple products, the iPhone is expensive device. This cost goes even up when you choose higher storage version.

But if you fail in any of the above mentioned criteria then there are plenty other options for you like HTC M8 and LG G3 or Samsung galaxy S5.