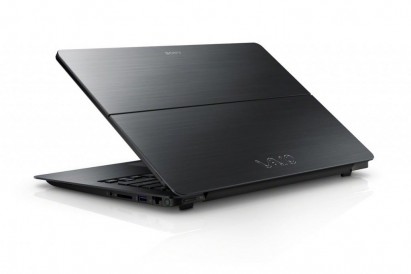 If you are a guy in dilemma who wants a good laptop but also a travel companion like tablets but thinks that its lot of hassle maintaining two different devices. Then Sony Vaio flip series may apparently make your dream come true. It is also one of the device which can function both as tablet as well as laptop. But that’s not the end of the story. Things become interesting when you realize how different approach Sony has adopted.  Unlike other adventures devices like Lenovo yoga notebook or HP split series, Sony’s flip series does its work better by flipping the screen from the middle. This way you don’t have to worry about meshing up your keyboard while using in tablet mode which is a major problem with Lenovo yoga laptops. Also it’s a full-fledged powerful laptop with Intel core i5 processor inside. So it can handle heavy productivity applications like Photoshop, AutoCAD and modern games (it’s not a gaming laptop so don’t go crazy here) which is not the case with detachable because those devices have to accommodate everything in that tablet form factor so Intel atom was their only choice.

Since it’s a Sony device so you can expect it to be classy. Brushed metal finish gives the laptop premium look. Overall design looks very good and attractive.  Nothing very shiny or alien is present in the laptop. It’s the simplicity of its design makes is different. The hinge about which the screen rotates is very sturdy and doesn’t feel like it will easily wear out and make your laptop screen a swing. Magnets at the bottom of the hinge keeps the screen locked when you use the device in laptop mode.  It’s very good productivity device if you are a designer. Screen is pressure sensitive so with stylus pen you can use the device in all your creative work. But remember the pen is not included. Sony wants you to buy pen separately.

Since it is a laptop so without talking about the hardware and its performance the review is incomplete. Sony Vaio 13 comes with the Intel core i5 4200U low power processor. Despite being a low power processor it runs the applications fairly well. I used the Photoshop for one week without encountering any sudden freeze or crashes. 4GB ram may not look very much now days but it’s clocked at 1600 MHz so it also does its job quite well. And let me remind you that ram is also a low power DDR3 RAM. And it’s not a bad thing at all because all these low power components helps persevering the battery life. Which is essential if you want to use to use the device in tablet mode also. Sony claims that it has 7.5 Hrs of battery life but I found only 6 hour. Which is not very far from the claim and it’s a good battery life for such a powerful device with a magnificent full HD display.

Now let’s discuss the fun part, Yup the ugly part. The device is a very light weight laptop but when it comes to the tablet. It’s a very heavy tablet. 1.3 kg may seems like lifting a mountain in hand use. Convention tablets are usually 500-600gm heavy so you can imagine the heaviness of this device. Also it’s quite big for a tablet. Smallest size of this series is 13 inch which is ok for laptop but not very much preferred size for tablet. My personal favorite is 7 inch for tablet.

The flip mechanism is very sturdy but still it’s hard to overcome the fear that screen will not come out on some not so fine day. This may be because we don’t see so many such bold design and it’s certainly a risky design for a laptop. Even I was skeptic until I got my hands on this device.

One other major disadvantage I felt is the lack of USB ports. This device is not completely out of USB port, it’s just that it has only two USB port. Convention laptop comes with 3 or 4 USB ports. Other ports are also missing like VGA display port and expansion port. So you may face difficulty connecting you convention VGA port compatible monitor or projector. But if your display devices support modern HDMI port and you have expensive HDMI cable then you may not face this problem otherwise you will have to search for appropriate VGA to HDMI converter. Because HDMI port is available in the laptop.  Other than this this device is a pleasure to use.

If you want a full hd display laptop with touch screen then it’s your best bet. The display is stunning and totally is a treat for eyes. It of course satisfies your need of tablet also with its unique feature of flip. But I would say this device is more of a laptop than tablet. So it’s good when you primary need is laptop and tablet thing you consider as a bonus or you are an artist who is looking for the replacement of his graphics tablet.

All these things comes with the cost. It’s an expensive laptop. But if you combine the cost of a laptop and a good tablet then it’s okay. Although it’s not a very good comparison but yeah you can console yourself with this logic. But if you only looking for simple plain laptop and you are tight on budget then it’s defiantly not for you.